Cats Have Their Ways

There is little doubt that the cat is one of the favorite domestic companions and one of only a handful of animals that typically are found within houses and living areas. The mystery that surrounds the cat has as much to do with myths and superstitions about the feline as it does with the independent and sometimes difficult to understand the personality of the cat. 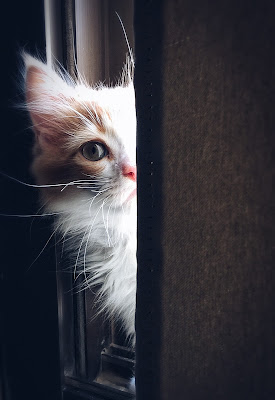 The cat, unlike any other domestic animal, actually chose to be involved with people on its own, it was not selectively domesticated by humans. The first cats were likely drawn to villages and human camps from their forest homes due to the number of rodents and other small prey animals that were attracted to human dwellings. These wild cats would gradually become more relaxed and calm around humans, and kittens born in the villages would be normalized to human contact or at least to human presence. Once people understood how cats controlled the rodents, they were here to stay.

There are many different archeological indications that the human-cat relationship has been ongoing for thousands of years. In remote burial sites in the Mediterranean Islands there have been skeletons of cats, mice, and humans all found in the same area, and while the mice may have got to the island by hiding in food and supply packages, the only way the cats would have been on the island is if they were brought there by the sailors and settlers. It is highly likely that the remote islands would have quickly been overrun with mice and rodents if not for the imported cats.

The first culture to domesticate and move the cat indoors to the position of companion was the Egyptians. This process began roughly 4000 years ago, with the Egyptian farmers and merchants actually feeding cats to keep them close by, controlling the rodent population in food storage areas. From this humble start, the cat soon reached a peak of importance in the Egyptian culture, actually been worshiped as the representation of gods and goddesses of the hunt and of fertility.

Cats had free movement through the residences

Cats had free movement through the residences and there was even a sacred burial site, the Temple at Bubastis, where cats were mummified and preserved as per the custom at the time. The death of a cat in a family sent the whole household into mourning. Laws forbidding the killing of cats by the punishment of death were in place for many hundreds of years in Egyptian cities. African cats were also domesticated and were treated with reverence and respect as symbols of fertility and as of a hunter.

Cats were used as items of trade between different cultures and were originally only found as pets and companions of only the wealthiest of merchants. Due to the reproductive ability of cats, this didn’t continue for long as the number of cats simply increased in many port and inland cities until they became a nuisance to the human population. Even today most cities worldwide have an ongoing problem with huge populations of wild or feral cats that live within the city limits.

Selective breeding of cats to produce different, recognizable breeds became popular in more modern times, however, the great majority of the domestic cats on earth are not purebreds, only about 5% of the total domestic population is a recognized breed. All other domestic and feral cats are generally lumped into two categories, domestic shorthair and domestic longhair for general identification.